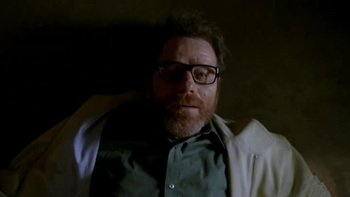 Guess he got what he deserved.
♫ Maybe tomorrow a bullet may find me
Tonight nothing's worse than this pain in my heart... ♫
And so, with a prayer to a higher power and Marty Robbins playing him off, Walt steals a car outside of a New Hampshire bar to face his destiny.
Advertisement:

Upon arrival in Santa Fe, he tracks down Gretchen and Elliot Schwartz's address under the guise of a reporter asking for an interview. After revealing himself to them, Walt demands that the couple deposit his remaining $9.72 million into a trust fund for Flynn which he should receive upon turning 18 — and that the money must appear to be coming from them, not from him — to which they agree. As added motivation, laser sights are directed at the Schwartz' chests from afar, with Walt threatening the couple that should they renege on their agreement, his highly skilled and very expensive assassins will kill them both without any hesitation. After Walt returns to his car, it is revealed that the "snipers" are in fact Badger and Skinny Pete with laser pointers. Walt learns from them that Uncle Jack's crew has taken over the distribution of Blue Sky and deduces that Jesse is still alive and is now cooking for them. Meanwhile, Jesse is shown cooking in Jack's superlab, daydreaming about indulging in his hobby of woodworking, only to wake up to the stark reality of being chained to his workstation.

The next day is Walt's 52nd birthday. He goes to Albuquerque and then heads to a Denny's for a meeting with Lawson, where he gets the M60 machine gun, ammunition, and car we previously saw him purchase. He later drives back to his old home, now abandoned and in ruins, to retrieve the ricin he had hidden inside the bedroom switch plate. Before leaving Walt stops in the middle of the empty living room and reminisces about his 50th birthday two years ago, where his journey into the meth business began with Hank inviting him for a DEA ride-along.

Lydia enters her usual café to get her usual cup of tea and meet up with Todd, who awkwardly attempts to hit on her shortly after he arrives. Walt suddenly appears in the café and pulls up a chair to their table, telling them he has an offer. He wants to sell them an alternative meth recipe that doesn't require methylamine in exchange for $1 million. Lydia asks Walt how he knew to find them at the café and he points out that Lydia is a creature of habit and that they used to have this same meeting at this exact spot, the same time every week. Lydia tells Walt that he can meet with the neo-Nazis to discuss the subject of the new meth recipe further, asking Todd to arrange for the meeting to take place in the evening. As Walt leaves, Lydia tells Todd that they can't indulge Walt's request for their own safety. Lydia insinuates that the best thing to do is to kill Walt, which she claims would be doing him a favor, considering his physical condition. She then goes about drinking her tea, adding the packet of sweetener that she found on her table.

Now alone in the New Mexican desert, Walt is seen putting together some sort of contraption in the trunk of the car he got from Lawson, using the M60, a car battery, and a garage door opener. By a press on his car lock remote, the device springs to life and starts rotating back and forth. Walt smiles in approval at this, before he turns his attention to his wedding ring, still hanging from his makeshift necklace...

Skyler, who is living in a cramped apartment with Flynn and Holly, receives a call from Marie, warning her that Walt is back in town. As Skyler hangs up, it is revealed Walt is already in the apartment, and she gives him five minutes to talk to her. Walt gives her the lottery ticket with the coordinates to where Hank and Gomez are buried, telling her to use it to negotiate a plea deal with the DEA, and tells her to claim that she got it from Walt forcing his way into the apartment and forcing her to make breakfast for him. Walt finally confesses that his involvement in the drug trade was never about helping his family, but because Walt enjoyed the power and prestige that came with it; it made him feel alive. Skyler agrees to his request to see Holly one last time. As Walt leaves he sees Flynn enter the apartment from afar, but only watches, not disturbing him.

Walt drives to Jack's hideout where he repeats his previous offer to Jack, which he rejects whilst ordering his men to kill Walt. Walt then insults Jack for betraying him and partnering up with Jesse, only for Jack to call for Jesse to be brought up to prove that they never agreed to a partnership. When Jesse is brought in, Walt tackles him without warning and uses his keys to remotely open the car trunk, revealing the M60 rigged to his car. The M60 guns down most of Jack's crew and wounds Jack and Walt. Todd manages to get in cover and gets through the shooting unscathed, but Jesse uses the confusion to sneak up on him and chokes him to death with his handcuffs. Walt picks up Jack's dropped gun and he approaches the wounded gang leader. Jack attempts his darnest to play it cool and begins bargaining for his life, telling Walt he'll never find his money if he pulls the trigger on him. But Walt's only response is to nonchalantly shoot him in the head.

With Jack and his gang dead, Walt gives the gun to Jesse and says he knows Jesse wants to kill him. Jesse angrily replies that he'll do it only if Walt confesses it's he who wants Jesse to shoot, which Walt does. Jesse realizes Walt is wounded and bleeding badly, and refuses to indulge his final request, telling him to do it himself as he goes for Todd's car. Todd's phone rings, prompting Walt to answer the call, revealing a visibly ill Lydia who is calling Todd to confirm Walt's death. Walt tells her he is still alive and informs her that her business partners are dead and he spiked her tea with ricin (remember the sweetener?) during their meeting before hanging up.

As Jesse prepares to leave, he and Walt share one last look of gratitude as they bid each other farewell. Jesse then drives away from the compound, laughing and crying hysterically. After seeing Jesse off, the adrenaline in Walt's system subsides, and he finally realizes that he is dying as he feels the pain from his gunshot wound. With the police approaching the compound, Walt tours through Jack's lab, admiring some of the chemical equipment and Jesse's final product: A perfect batch of meth, a sign for Walt that he has succeeded as a teacher. Finally succumbing to his wound, Walt smiles at the knowledge that his family is safe and financially secure. He collapses, and dies as he stares serenely at the ceiling. The final scene showing the officers storming the lab and two officers standing over Walt's body, ironically, in the same kind of place where he felt so alive.

As is written in the script

♫ Guess I got what I deserved
Kept you waiting there, too long my love
All that time without a word
Didn't know you'd think that I'd forget, or I'd regret
The special love I had for you, my baby blue.
All the days became so long
Did you really think, I'd do you wrong
Dixie, when I let you go
Thought you'd realize that I would know
I would show the special love I have for you, my baby blue. ♫