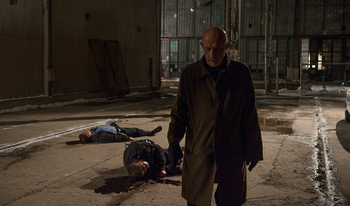 Mike goes out west with a bang.
Advertisement:

In a flashback, Mike arrives in Albuquerque and waits for his daughter-in-law, Stacey, to pick him up. He ducks into a bathroom and applies a new bandage to his bleeding shoulder wound. Mike promises Stacey that he will stay as long as he can to support her and her daughter, Kaylee. Stacey is disturbed by this news, mentioning a heated phone call between Mike and his deceased son (and Stacey's husband) Matt a few days before his death. Mike tells her not to dwell on it. After consulting a taxi driver, Mike visits Dr. Caldera to have his wounded shoulder treated. Caldera offers to refer Mike for some "work," to which Mike declines.

In 2002, Mike is escorted by Philadelphia PD Detectives Sanders and Abbasi to the police station, and requests Jimmy as counsel. Mike asks him to spill coffee as a diversion so Mike can steal Abbasi's notebook. From it, Mike learns Stacey called the police after she found money Matt hid in a suitcase. After briefly losing his temper at her, he reveals the real story: Matt was a clean cop in a corrupt precinct, Mike included. Matt refused to participate, so Mike called him to admit he was dirty and counseled him to take the money, if only for his family's sake. Sadly, Matt's partner and his mentor, Officer Hoffman and Sergeant Fenske, killed him for fear that he might turn them in.

In another flashback, Mike breaks into a police car outside a bar in Philadelphia, then drinks heavily inside and tells Hoffman and Fenske that he knows what they did. When he leaves, stumbling around, the cops pick him up and take his gun. They ask Mike what he meant earlier, and he replies that he knows they killed Matt. Outside the city, Fenske convinces Hoffman to shoot Mike with his own gun and stage it as a suicide. Mike compliments Fenske on his plan; he was pretending to be drunk, and the gun they took off him is unloaded. He pulls out a second gun he stashed in the police car, killing Hoffman instantly. Fenske draws his pistol and fires back, hitting Mike in the shoulder, but takes a bullet in his neck for his troubles. Mike shoots Fenske in the head and gets away.

Presently, Stacey asks Mike who killed Hoffman and Fenske. "You know what happened," Mike wearily replies. "The question is, can you live with it?"