Confess to a Lesser Crime 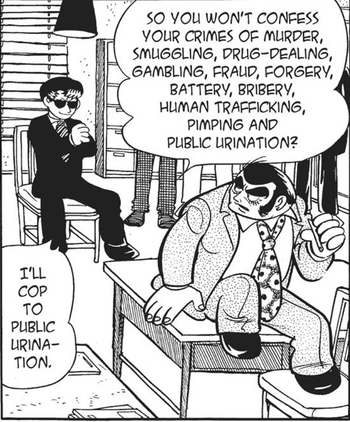 Jesse: Why'd you go tell her I was selling you weed?
Walt: Because somehow it seemed preferable to admitting that I cook crystal meth and killed a man.
—Breaking Bad
Advertisement:

Your crimes are catching up to you. The cops/your boss/your wife knows that you're hiding something, and they're no longer buying your lies. What are you to do?

Confess, of course, just not to what you really did. Maybe you admit to a piece of what you did, but not the whole thing, maybe you completely make something up. Either way, you hold them off discovering what you're really up to.

There are clear advantages to pretending to come clean. When you admit to wrongdoing, people usually don't assume you're lying. When they think they've caught you, they don't usually keep investigating, and you've got a perfect explanation for why you've been acting strangely and looking guilty.

The disadvantage, of course, is that you're on the hook for whatever you confessed to, so you better be sure it's worth it to keep the greater crime concealed.

May be used by an undercover cop to keep from being exposed, or by a Justified Criminal to avoid punishment.

Different from a Plea Bargain in that the character is trying to keep their crimes concealed, not trying to strike a deal to avoid punishment.

In Real Life, this is one of the most common ways in which criminal trials are resolved. For instance, someone accused of murder may well confess to the crime of manslaughter/culpable homicide, or someone accused of dealing drugs may confess to possession but not to intent to supply. However, it is generally up to the prosecutor if they want to go with this - if they feel that allowing a murderer to confess to manslaughter would not be a just result, then they are within their rights to reject a plea of innocence and fight on. This trope is so common, in fact, that some criminal defense lawyers have said that they dread genuinely innocent clients - there is only one just result in their trials, whilst most of their clients are at least guilty of something, if not the exact charge on their indictment.

However, the fictional version confessing to a not only lesser but completely unrelated crime is significantly rarer in real life; typically when the authorities are interrogating a person they have some idea of what crime they actually suspect was committed.