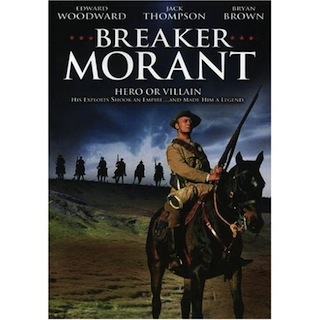 A 1980 Australian film directed by Bruce Beresford, based on true events from the second Anglo-Boer War in South Africa.

The late Edward Woodward plays the title character, an English officer serving with the Bushveldt Carbineers, an Australian cavalry unit. The film depicts the military trial as Morant and two of his fellow officers - Peter Handcock and George Witton - are charged with war crimes for executing surrendering prisoners, though they maintain that they were acting under orders. A murkier issue involves the death of a German missionary, which causes diplomatic tensions with Imperial Germany. As the trial progresses, it becomes clear that the military intends to convict the officers to cover up the complicity of the military leadership in the executions. The film is based on "Scapegoats of the Empire", an account written by Witton, who, like Morant and Handcock, had been sentenced to death, but had his sentence quickly commuted to life in prison. Many protests by Witton led to his release just over two years later, though, he was never pardoned.