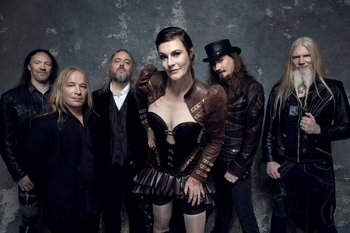 From left to right: Kai Hahto, Emppu Vuorinen, Troy Donockley, Floor Jansen, Tuomas Holopainen, and Marco Hietala.
Oh how I wish,
for soothing rain,
all I wish is to dream again.
My loving heart,
lost in the dark,
for hope I'd give my everything.
— "Nemo"
Advertisement:

Nightwish is a Symphonic Power Metal band from Finland formed in 1996. It was formed by Tuomas Holopainen while he was sitting besides a campfire. They originally started as an acoustic-only band with keyboards, but noticed that vocalist Tarja Turunen's operatic voice was too powerful for an acoustic band, so Holopainen decided to add heavy metal elements such as electric guitars and drums. They soon released their debut album Angels Fall First, which had mixed reviews.

While initially disappointed, they soon became noticed with their song Sacrament of Wilderness and achieved worldwide fame with their next two albums, Oceanborn and Wishmaster. After the success, they released the darker Century Child. After their fifth (and breakthrough) album Once, they held a live show called End of an Era. Shortly after the performance, vocalist Tarja Turunen was fired for allegedly viewing the band as a way to gain publicity and make money. They even expressed this opinion in an open letter on their web site, though this is only one side of the coin. They later hired vocalist Anette Olzon, which has caused a division in the fanbase. Their first album with Anette as the main vocalist, Dark Passion Play, was released in 2007.

The album Imaginaerum, formerly Imaginarium (they changed the name to avoid confusing it with various other things with that name,) is a concept album, paired with a full-length feature film based on the plotline, was released in November 2012 in Finland with a more widespread DVD release in 24 April 2013.

On October 1, 2012, it was announced that Anette had left the group, with the reason given being that "it has become increasingly obvious that the direction and the needs of the band were in conflict, and this has led to a division from which we cannot recover." Floor Jansen (After Forever, ReVamp) took Anette's place in the Imaginaerum World Tour and, although the band claimed that the vocalist issue would be settled sometime in 2014, was announced as Olzon's permanent replacement on October 9th, 2013. At the same time, multi instrumentalist Troy Donockley, who had guested on previous albums, was also made a permanent member. The band later released a documentary with the Showtime, Storytime live album amusingly titled Please Learn the Setlist in 48 Hours, purportedly the amount of time Floor had to learn the tour list.

saying that he would be taking a leave of absence from Nightwish due to his struggles with insomnia. He revealed that Kai Hahto of Wintersun would be taking his place for the recording of their next album, 2015's Endless Forms Most Beautiful, and upcoming tour. This change became permanent in 2019 with Jukka confirming that he'd continue to assist behind the scenes. The band as a whole took 2017 off, then came back in 2018 with a Milestone Celebration compilation album, Decades, and a tour emphasizing songs from the earlier years. Also during the break, Floor Jansen recorded a long-delayed Hard Rock album, Northward, with Jørn Viggo Lofstad of Pagans Mind, while Tuomas Holopainen, Troy Donockley, and Johanna Kurkela produced their own project, Auri.

The successor to Endless Forms Most Beautiful, called Human. :II: Nature. (stylised as HVMAN. :||: NATVRE.) was released in April 2020. The album's musical and lyrical thematics deal with the birth of mankind and civilization.

he would be leaving the band and public life, citing his struggles with chronic depression and his disillusionment with the music industry in general. He also wrote "Conspiracy is the word of the day. For the people who like them I need to say that my 55th birthday is now on 14th of Jan and I’ve certainly done my time for now. Blaming for instance Tuomas is an insult to both him and my free thinking. This is a very sad thing to all of us too. Have a care please. [...] I have some reinventing to do. I hope to tell you about it on [sic] 2022. It’s not a promise though."

On May 28, Nightwish announced

that Jukka Koskinen of Wintersun would be performing as a session bassist for the end of May streaming concerts and the upcoming world tour.

Example of:
Social Media Is Bad