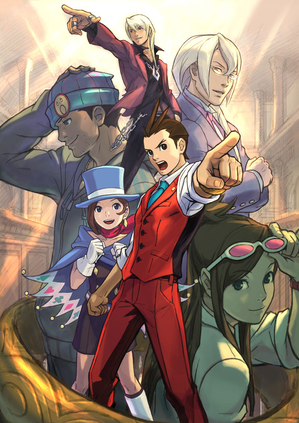 He is as loud as he looks. And surprisingly reliable.
"A bold New hero has claimed the defense's bench!"
—from the first English trailer of Apollo Justice
Advertisement:

The fourth game of the Ace Attorney series (Japanese title 逆転裁判 4, Gyakuten Saiban 4; lit. "Turnabout Trial 4") and the first installment made specifically for the Nintendo DS.

The gameplay mostly follows the same pattern as the previous games, with one major addition: Perceive. With this power, Apollo can notice the involuntary "tells" that result from a lie or deception, and use them to make progress in his cross-examinations.

After this game the series continued on the DS with two spinoff games; Ace Attorney Investigations: Miles Edgeworth and its sequel. The core series would not continue for another six years, finally resuming in 2013 with Phoenix Wright: Ace Attorney – Dual Destinies on the Nintendo 3DS.

An Updated Re-release with higher-resolution artwork, in much the same style as that of the trilogy package of the prior three games, was announced for iOS and Android in October 2016, and released the following December. A Nintendo 3DS port, featuring similar enhancements, was released in November 2017.