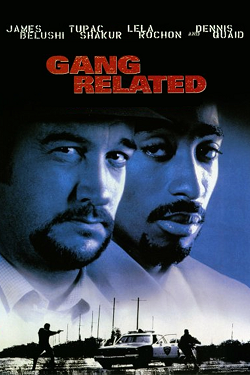 Gang Related is a 1997 crime movie starring James Belushi, Tupac Shakur, Dennis Quaid, and James Earl Jones. The film is dedicated to Shakur, who was murdered not long after filming had wrapped.

Two dirty cops kill an undercover officer by mistake and try to frame a homeless man for the crime. Their scheme becomes more complicated when it gets to court and the man turns out be a famous missing person.