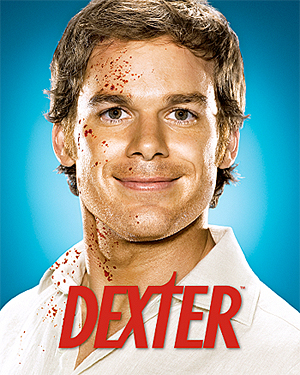 Don't worry, it's just ketchup.
"Tonight's the night. And it's going to happen again and again. Has to happen."
Advertisement:

Dexter is a crime television show based loosely on the novel Darkly Dreaming Dexter by Jeff Lindsay, starring Michael C. Hall as Dexter Morgan, a blood-spatter analyst for the Miami police department. He has a loving tomboy foul-mouthed sister who works as a cop in his department, and a host of eccentric coworkers.

Unlike most others, Dexter specializes in paying evil unto evil; rather than innocent people, he targets other murderers including those like himself, sex offenders, and other really bad people. So it's all good! Sort of.

The series follows him as he assists in homicide investigations, dealing with girlfriend issues, helping his sister in dealing with department politics all the while cleaning up after a flawed justice system. Adhering to The Code of Harry — his adopted father, a police officer who saw the makings of a serial killer in him long ago — Dexter confines his homicidal urges to those criminals who have gotten away with their crimes, and does it so carefully and cleanly that he is not likely to get caught.

When another serial killer begins sending special messages just for him in the crime scenes — and in his house — Dexter is pulled into a cat-and-mouse game that will force him to reexamine his chosen life...

The show premiered on Showtime in 2006. The eighth and final season aired in summer 2013. A limited revival series titled Dexter: New Blood started airing in late 2021.