Saved by the Coffin 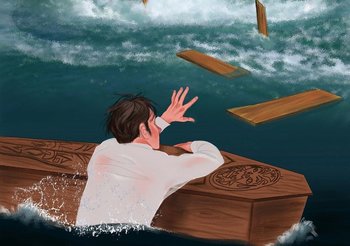 “...the coffin life-buoy shot lengthwise from the sea, fell over, and floated by my side...”
Advertisement:

A coffin is, most commonly, a symbol for death. Its sole purpose is to serve as a container for dead people. That is why it can have a strong effect to subvert that connotation by using a coffin as a means for the hero to save his life: A symbol of death as a life saver.

The most common variation is for the hero to hide in the coffin. Maybe he's being chased by someone across a graveyard, or maybe he's illegally examining a deceased loved one when he hears their murderer approaching. This comes in two flavours: The coffin may be empty, which can have a very eerie feeling and may evoke pictures of being Buried Alive; or it may already be occupied, which can either be very squicky or Played for Laughs, with the hero apologizing for the intrusion.

Hiding oneself in a coffin or sarcophagus is not the only option covered by this trope, though. Most coffins are made of light wood, so they float on water and can thus serve as a makeshift lifeboat, and inventive heroes can find other uses for them as well.

Of course, the heroes are not the only ones who can do this. If the villain of a story uses this, the connotations may be different: After the danger is gone, they may emerge from the coffin, thus giving the impression that they are somehow connected to death.

Especially creepy when the coffin is, for one reason or another, the hero's own.

Should this backfire on the hero, they could very well become Buried Alive. Alternatively (and less Nightmare Fuel-y), it can lead to Waking Up at the Morgue.

May come attached to Faking the Dead if the hero pretends to actually belong in the coffin. Compare Cramming the Coffin, where the person hiding (or, more accurately, being hid) in the coffin is already dead. Compare also the Bodybag Trick, which uses a bodybag instead of a coffin, but can have similar symbolic effect.