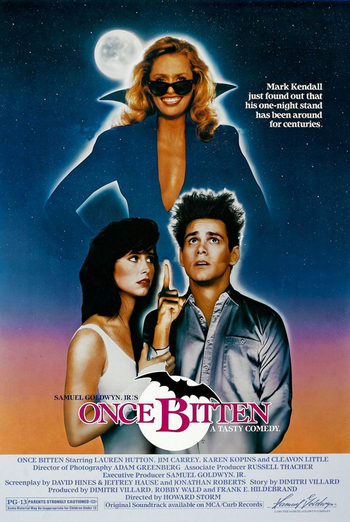 Once Bitten is a American 1985 horror comedy film directed by Howard Storm.

A spoof of the "vampire seducer" genre, the film is notable as a very early vehicle for the career of Jim Carrey, who plays Mark, a sex-minded teenage boy in love with his girlfriend Robin (Karen Kopins), a "good girl" who won't put out, keeping them both virgins.

Mark, frustrated by Robin's refusal to give him any, goes into Los Angeles. The Countess spots him, and decides to take his blood for her youth and add him to her coterie of immortal vampires. Robin knows that something's up — will The Power of Love be enough to pull Mark back from the clutches of an undead seductress?