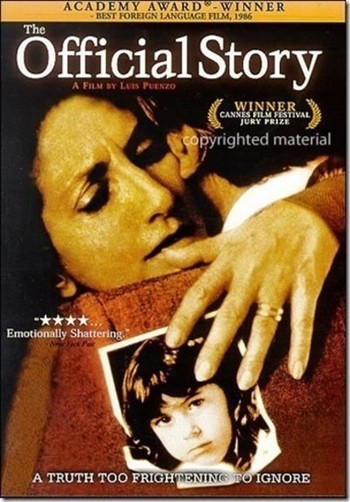 The Official Story is a 1985 film from Argentina directed by Luis Puenzo.

Buenos Aires, 1983. Argentina has been ruled by a military junta for seven years in what is euphemistically called the National Reorganization Process. The state has gone on a ruthless campaign of violence and murder against what it regards as subversive elements. At least ten thousand and possibly as maybe as 30,000 people have been kidnapped, tortured, and murdered by the Argentine government.

Alicia and Roberto are an upper-middle-class couple in their late forties. She's a schoolteacher and he is a government bureaucrat, or in other words, exactly the sort of placid bourgeoisie that make no trouble for the dictatorship. Their little family is rounded out by a daughter, Gaby, who is five. Alicia and Roberto adopted Gaby as an infant after Alicia proved unable to conceive.

Alicia's childhood friend, Ana, returns to Argentina after years in exile. Ana wasn't even a subversive—she simply lived with one for a while—but she tells Alicia a terrifying story of her kidnapping, brutal torture, and rape at the hands of the secret police. Worst of all, for Alicia at least, Ana tells her something very disturbing: pregnant women in the hands of the secret police routinely had their babies taken away from them after birth. Alicia, whose daughter was obtained directly from the hospital in an adoption where money changed hands, starts having some troubling doubts about just how she and Roberto acquired little Gaby.

Production on this film began immediately after the military junta was toppled in the fall of 1983.