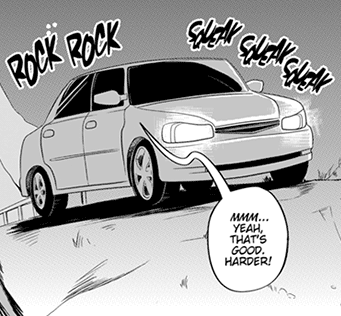 Bonus ... points for being at Makeout Point
"Dudes! If the tent is a-rockin' don't come a-knockin'!"
— Charlie to Sam and Dean, Supernatural
Advertisement:

A form of Sexy Discretion Shot where a vehicle or other small enclosed space is shown moving vigorously to show that its occupants are "moving vigorously" too. (A common subversion is to then show that the vigorous activity in question was not the one you were thinking of.)

Sister trope to Auto Erotica. May be used to help set the scene at Make-Out Point. If they get particularly carried away (or the parking brake fails), may overlap with Destructo-Nookie.

Compare Right Through the Wall.