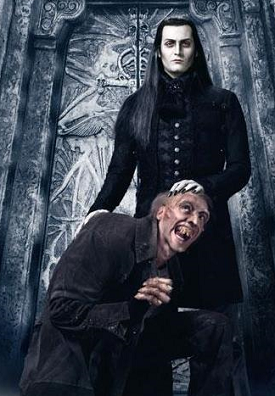 "T-thank you, Master!"
"Historically, he...Dracula has found some way of exerting his will more strongly over one human for a period of time...We first became aware of the one he controlled through the rural rumor. He'd take a single human to taunt the townsfolk, scare them. They had a word for him, it was Anglo-Saxon in origin, 'the one who lives at the edge of the field.'"
— Linden Hobbes, American Vampire
Advertisement:

Enter The Renfield. Reasons for this can vary; either the slave has willfully gone into servitude, the would-be slave got addicted to the vampire's blood, the vampire used some sort of mind-control power, occasionally they'll just be hired, and/or the vampire simply tempted the would-be servant with the possibility of becoming a vampire as well.

This trope is usually associated with Pragmatic Villainy (for vampires, at least) for a few reasons, one of them being that having a servant/ally who doesn't have the same weaknesses as you can be pretty useful at times...if you can resist the urge to suck him dry of his blood, that is. For example, said servant can guard and protect your coffin/tomb/resting place during the day to make sure that no vampire hunters come along to stake you, pour holy water all over your body or cut your head off while you sleep. A vampire may also simply need a relatively unassuming human agent who can walk around in civilized places in broad daylight and get important things done; good luck getting a raised zombie or skeleton to do that. And finally, there's always the necessity for emergency rations. The Renfield as a faithful servant can often overlap with The Igor.

Subtrope to Muggle in Mage Custody, when an ordinary person is a slave of a mage or a supernatural being. The more compassionate and honest version is someone Supporting-the-Monster Loved One.

Penguin accidentally releases Dracula onto Gotham City and as such becomes hypnotized into being Dracula's human guard.

Penguin accidentally releases Dracula onto Gotham City and as such becomes hypnotized into being Dracula's human guard.