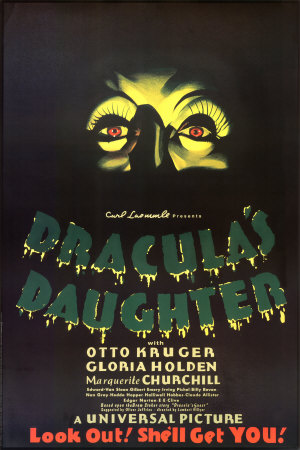 Marya: Sandor, look at me. What do you see in my eyes?
Sandor: Death.
Advertisement:

Dracula's Daughter is a horror film from 1936 by Universal. It was the first sequel to the Bela Lugosi vehicle Dracula. Lugosi also appeared on some promotional stills, but he isn't featured in the actual film.

The film starts where the last one left off. Two constables stumble upon the corpses of Renfield and Count Dracula. They also meet Professor Van Helsing who tells them what has happened. Baffled by his crazy story, they call in Scotland Yard for help. Threatened with execution or the madhouse, Von Helsing calls for old student of his, psychiatrist Dr. Jeffrey Garth, to help him clear himself.

At the same time, Countess Marya Zaleska, the title character, steals Count Dracula's body and burns it on a funeral pyre, hoping that she'll be set free from his vampiric influences and could begin a life as a normal woman. After this fails, she turns her attention to Dr. Garth, hoping that psychology is the way, despite the warnings of her servant Sandor.

The producers did their best to tone it down, but the film still has some Les Yayness evident.

This film provides the examples of: