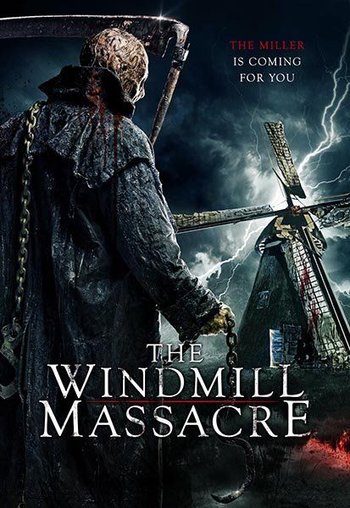 This isn't Hell, it's Holland!
Advertisement:

The Windmill Massacre, known as The Windmill in the US, is a 2016 English-language Dutch slasher film directed by Nick Jongerius. Charlotte Beaumont stars as an Australian fugitive in the Netherlands who joins a tour group to escape extradition.

Jennifer is an Australian girl on the run from her past who washes up in Amsterdam. In a desperate attempt to stay one step ahead of the authorities, she joins a coach-load of tourists embarking on a tour of Holland's world famous windmills. When the bus breaks down in the middle of nowhere, she and the other tourists are forced to seek shelter in a disused shed beside a sinister windmill where, legend has it, a Devil-worshiping miller once ground the bones of locals instead of grain. As members of the group start to disappear, Jennifer learns that they all have something in common - a shared secret that seems to mark them all for doom.

Tropes used in The Windmill Massacre include: