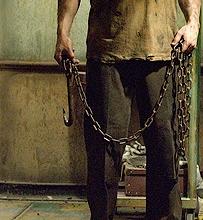 You'll be hooked on a feeling. That feeling will be pain.
"Hooks in you, hooks in me, hooks in the ceiling
For that well hung feeling
No big deal, no big sin, strung up on love
I Got the hooks screwed in."
— Iron Maiden, "Hooks In You"
Advertisement:

A Sub-Trope of Improvised Weapon, a hook is a curved or bent device for catching, holding, or pulling, while a crook is an implement having a bent or hooked form, such as a shepherd's staff. These can be great weapons with the addition of tripping and catching things. Included are canes and fishing hooks. Hooks on a rope or chain can also be used as Grappling-Hook Pistol.

Meat hooks are quite common when this trope is applied. Especially in the hands of a butcher. (literal or otherwise) They can come in several varieties as well; such as a hand-held hook with a handle, just the meat hook itself or even attached to a length of chain (sort of turning it into an Epic Flail). The chain definitely helps when the hook is thrown, then snags onto somebody and that poor soul is being dragged back. Usually to their death.

Sometimes often seen in situations (cartoons or comedies mostly) where a comedian is doing so poorly on stage, that a large wooden crook on a stick comes up from offstage and yanks him away: see Vaudeville Hook.

See also Hook Hand, Cane Fu, Parasol of Pain, Anchors Away, Crowbar Combatant and Sinister Scythe (if you're thinking of sickles). May or may not related to Hooking the Keys depending on the context.

From Madness Combat 7.5 onwards, Sanford wields a meat hook on a rope that he can use to slash, impale, and grapple.

From Madness Combat 7.5 onwards, Sanford wields a meat hook on a rope that he can use to slash, impale, and grapple.