Film / In the Line of Duty 4: Witness 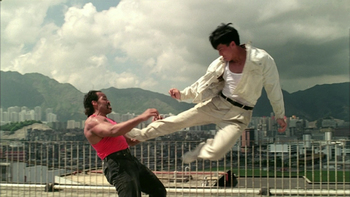 Inspector Rachel Yeung (Cynthia Khan) finds herself hot on the trails of drug dealers while on assignment in America, leading her back to Hong Kong to a suspect, mild-mannered dock worker Luk Wan-ting (Yuen Yat-chor). However, two Chinese-American investigators - police lieutenant Donnie (played by Donnie Yen) and CIA operative Michael (Michael Wong) are on the case too, and follows Rachel back to Hong Kong.

Lots and lots of it.

Like, you probably couldn't count the number of fight scenes, vehicle chases, high-rise battles, beatdowns, on both hands.