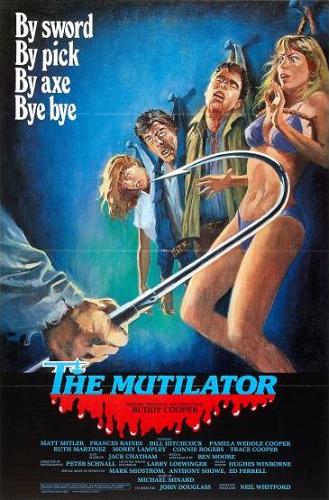 So far, it outdoes Three on a Meathook.
"He stands supreme!"
Advertisement:

The Mutilator (also known as Fall Break) is a 1985 Slasher Movie.

As a child, young Ed, Jr. accidentally kills his mother while goofing around when he was cleaning his dad's M1 Garand (on the patriarch's birthday, no less). Big Ed, distraught by his wife's death, is angry to the point that he non-verbally threatens to use the weapon on his child, who runs off. Big Ed drags his wife's corpse to his lounge, drowning his sorrows and even outright trying to let the dead body drink up.

Years later, the boy and his friends have nothing to do while on break from school, but Big Ed calls to ask his son for a favor; apparently his beach condo needs cleaning out and Ed Jr. is just the man for the job. So Ed takes his pals off to the house. When they get there, Ed's dad is nowhere to be found. Neither is his battle axe.