Theatre / A View from the Bridge 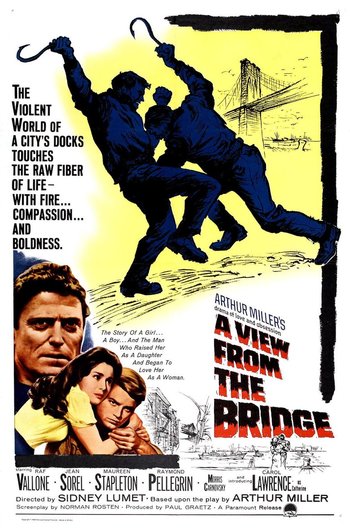 "Every few years there is still a case, and as the parties tell me what the trouble is, the flat air in my office suddenly washes in with the green scent of the sea, the dust in this air in blown away and the thought comes that in some Caser's year, in Calabria perhaps or on the cliff at Syracuse, another lawyer, quite differently dressed, heard the same complaint and sat there as powerless as I, and watched it run its bloody course."
— Alfieri
Advertisement:

A play written by Arthur Miller in 1955, and set in Red Hook, Brooklyn during the 1950s. Miller modelled it after a traditional Greek tragedy with the lawyer Alfieri acting as the Chorus equivalent and so the main character, Eddie Carbone, a longshoreman, succumbs to his fatal flaw and ultimately dies in a classic example of Never Bring a Knife to a Fist Fight.

Eddie's wife, Beatrice, has two Italian cousins who have illegally arrived in New York. Obligated by Italian family values, Eddie takes the two into his home where they live. The older of the two cousins (who are brothers) is Marco, a responsible married man who came to America only to earn enough money to support his wife and sick child. The younger is the flamboyant and blond Rodolfo, with whom Eddie's niece and surrogate daughter, Catherine, feels an instant attraction to.

Over time, with Rodolfo's presence, Eddie's feeling towards Catherine, once appearing paternal towards to start of the play, become greater until Eddie is so obsessed with keeping Rodolfo away from Catherine he begins to act wildly and self-destructively until, at Christmas, a drunk Eddie comes across the young pair and kisses Catherine passionately and Rodolfo in violent mockery.

Then, things get worse as Eddie betrays his family by calling the immigration police to get the Rodolfo and Marco deported and, more importantly, away from Catherine. With the arrest, Eddie becomes a traitor and an outcast in the community, and Marco spits in his face.

But things aren't really working as Rodolfo is going to marry Catherine and become an American. Against everyone's advice, Marco challenges Eddie after the latter stops the wedding before it starts. Eddie draws a knife in the fight that the unarmed Marco turns back into him, killing him.

A View from the Bridge has been revived several times since its original Broadway run. It's also been adapted for television and performed as an opera. Sidney Lumet directed a film version in 1962.

Alternative Title(s): A View From The Bridge