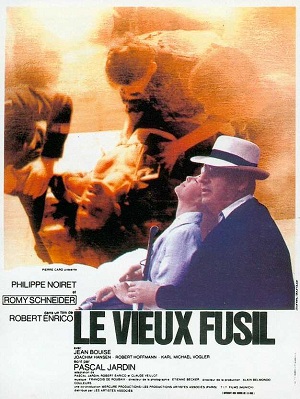 Le vieux fusil (known as The Old Gun a.k.a. Vengeance One by One in the US and The Last Straw in UK) is a 1975 French film directed by Robert Enrico, and starring Philippe Noiret, Romy Schneider and Jean Bouise.

During the German retreat from France in the summer of 1944, Julien Dandieu is an ageing, embittered surgeon in the local hospital of Montauban. Frightened by the German army entering Montauban, Dandieu asks his friend Francois to drive his wife Clara and his daughter Florence to the remote village where he owns a chateau. One week later, Dandieu sets off to meet them for the weekend, but a Waffen SS squad has now occupied the village and killed its inhabitants. His daughter and wife, who was raped, were both killed by the cruel soldiers who shot his young daughter and immolated his wife with a flamethrower. Dandieu decides to kill as many Germans as possible to avenge his family. He takes an old gun he used as a child while hunting with his father and starts to ruthlessly kill them one by one.