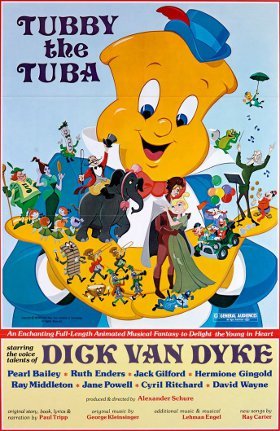 Tubby the Tuba is a 1975 animated film produced by the New York Institute of Technology, based on the 1945 song of the same name by Paul Tripp and George Kleinsinger. This was not Tubby's debut in animation; he had appeared back in 1947 in the very final Puppetoons short of the same name. This movie however was feature-length as opposed to the shorter Puppetoon film.

Tubby the Tuba (voiced by Dick Van Dyke) is laughed at by other instruments in his orchestra for wanting to play his own song. Tubby then leaves to go find his own song, first joining the circus and then visiting a musical city before meeting a frog who teaches him a song he can perform with his orchestra.

The 1975 Tubby the Tuba adaptation was the brainchild of Alexander Schure, millionaire and founder of the New York Institute of Technology. Work began in 1974 using the school's animation department. As Schure knew little of animation, he recruited many animation veterans from the Eastern Seaboard like alumni from Fleischer Studios and Sam Singer of Courageous Cat and Minute Mouse. While the film was completed with hand drawn animation, the fledgling field of computer graphics was considered to help in production. Two consultants brought on the project, Edwin Catmull and Alvy Ray Smith, later would go on to found Pixar.