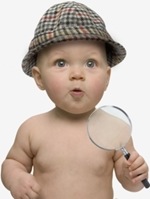 The culprit must be the one who forgot to change his diaper.
Advertisement:

For some people, solving mysteries is just in the blood.

This trope is when a Kid Detective grows up to be a Private Detective, usually with the help of his/her Badass Family. In short, the parent was a PI (or other profession) and raised their child from a young age to help Mommy/Daddy spy on other people. Likely a Family Business, but not always.

For heroes instead of detectives, see Kid Hero All Grown Up.