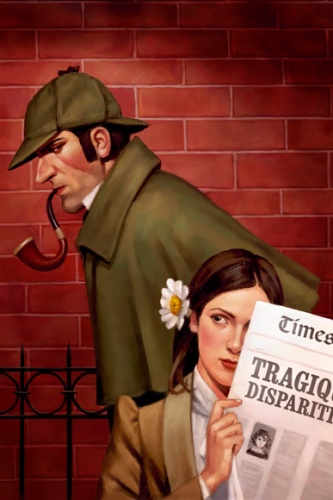 Enola Holmes is the younger sister of Sherlock Holmes and Mycroft Holmes and the protagonist of a series of children's detective novels by Nancy Springer.

Enola has been raised by her mother in seclusion in the countryside, taught to be independent and a feminist Suffragist. However, after her mother vanishes into thin air on Enola's 14th birthday, the girl's much older brothers come to collect her. Neither has much interest in raising a girl, so they agree the best route is to send her to a boarding school where she can learn to be a "proper young lady."

But Enola has other ideas. Drawing off of her mother's constant reassurance, "Enola, you will do very well on your own" and a healthy sum of money that her mother had squirreled away in the house, Enola gives her brothers the slip and sets out to seek her fortune in London, and on the way, she discovers her vocation as a "Scientific Perditorian", in other words, a solver of crimes through analysis, disguise, sheer grit, and the occasional well-placed dagger.

The series is completed as of 2010, and the six books are as follows:

The series had a Comic-Book Adaptation by writer/artist Séréna Blasco that was produced by the French publisher, Jungle! and republished in English by IDW.

The 2020 film adaptation stars Millie Bobby Brown as the title character, Henry Cavill as Sherlock, Sam Claflin as Mycroft and Helena Bonham Carter as their mother Eudoria. A sequel is in production.

Not related to the 90s series The Adventures of Shirley Holmes about a young female descendant of the original Sherlock in modern times.