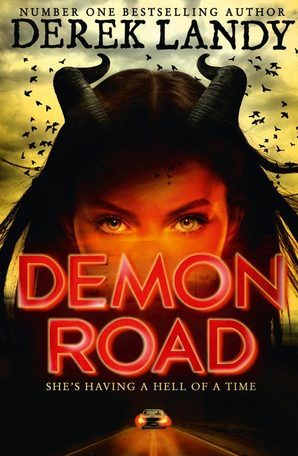 She's having a hell of a time
"For anyone who ever thought their parents were monsters..."
Advertisement:

Demon Road is a trilogy of books by Irish author Derek Landy, creator of Skulduggery Pleasant. The series consists of Demon Road, Desolation, and American Monsters.

The story revolves around Amber, an ordinary 16 year old girl from Florida who, after a shocking encounter, discovers a dark and twisted family secret. Her parents and their friends are demons, out for her blood to fulfil a violent pact with a creature known as the Shining Demon. Forced to run for her life, Amber finds herself under the protection of Milo, a quiet, sarcastic and mysterious man driving a Dodge Charger, which seems to be alive. Tagging along for the ride is Glen, the annoying road trip companion from hell, who has come to America from Ireland after being told he has forty days to live.

Forced to flee across America on the eponymous Demon Road, the trio find themselves facing demonic and otherworldly dangers as they search for a way to stop Amber's parents; Undead serial killers, Vampires, Servants of hell and, of course, the ebony-horned and red-skinned demons that are relentlessly hunting the trio.