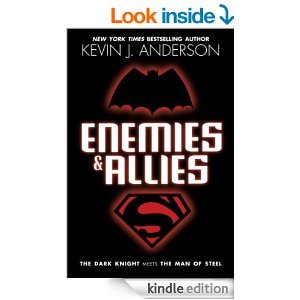 Enemies & Allies is a superhero novel by Kevin J. Anderson, where Batman meets Superman in the late Fifties, at the height of the Cold War. Batman is doing his usual thing in Gotham City, but discounts reports that the "Superman" of Metropolis is an alien from outer space. Imagine his surprise when, in the course of a late-night raid on Lex Luthor's mansion, he runs smack-dab into the Man of Steel. Their relationship is a bit rocky at first, but when Superman runs into trouble he can't handle by himself, the Dark Knight is the one to rescue him.

Enemies And Allies contains example of: