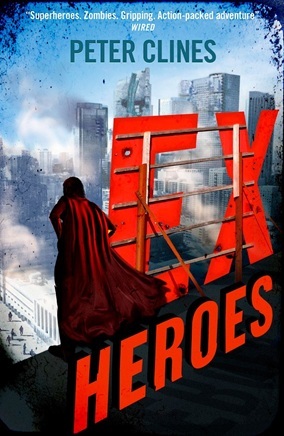 "I'm pretty sure you already know who I am. As for everyone else... I don't think there are enough people left to make a secret identity worth the effort."
— St. George, Ex-Heroes
Advertisement:

Ex-Heroes is a novel originally published by Permuted Press. It combines superheroes, post-apocalypse, and zombies into novels written by Peter Clines. A series of superheroes appear during the 21st century, each possessing a variety of superpowers and abilities. They make a brief splash, curing all sorts of ills in the Los Angeles area (amongst other places).

Unfortunately, they don't get to enjoy their success long before the entire world is struck by a Zombie Apocalypse of epic proportions. Now, a year later, they have to defend their tiny enclave of human survivors from a seemingly endless horde of undead monsters.

A sequel, Ex-Patriots, was released in 2011. It follows the continuing adventures of the original heroes and adds a second group of survivors saved by the military.

A third book, Ex-Communication, was released July 9, 2013, and deals with the return of a hero long presumed dead.

Book four, Ex-Purgatory, was released on January 14, 2014. It sets off on a slightly different path, following George and company in an alternate reality.

Book five, Ex-Isle, was released on February 2nd, 2016. Ex-Isle follows the heroes investigating a newly-discovered group of inhabitants living on an artificial island.

Please put any character-related tropes on the characters page.