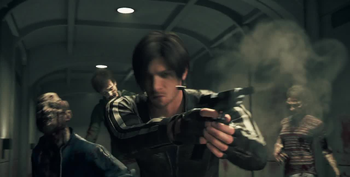 Under attack by zombies? Who You Gonna Call?note Leon S. Kennedy
Advertisement:

The Zombie Apocalypse has hit! Flesh Eating Zombies have been unleashed upon the world and humanity is getting eradicated as we speak. So to survive this new world of zombies, it stands to reason it takes a tougher than average badass who excels in cutting through these walking corpses.

Meet the Zombie Apocalypse Hero, a Stock Character found in either a Zombie Apocalypse story, an Episode of the Dead, or any other setting with zombies. This character is either an Action Hero or Action Survivor who finds they have a talent for slaying zombies. They may even become a go to specialist that is called upon for their services to clear out zombie outbreaks.

Common picks for their weapon of choice include guns (particularly shotguns, sawed-off or not), machetes, chainsaws, crowbars, or some other weapon efficient at making the undead into the properly dead.

The discovery of these characters often comes as an unexpected surprise considering their average and unremarkable civilian identity. Expect The Apocalypse Brings Out the Best in People to be in play.

Note that not every person who is in a Zombie Apocalypse counts. They have to be shown to be proficient in fending off the hordes and staying alive.

Subtrope of Hunter of Monsters or Action Survivor with the specialty being zombies.