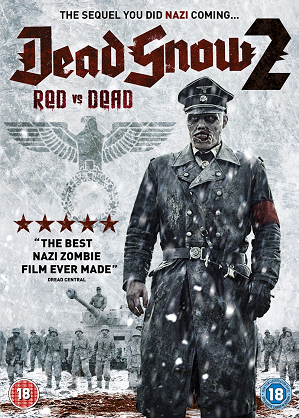 The 2014 sequel to the Norwegian horror comedy Dead Snow.

Right after the events of the previous film, Martin manages to fight back and run away from the Nazi zombies. In the process, the zombies' leader loses his right arm, which is used to replace Martin's lost one when he is eventually taken to a hospital. In there, he learns that the said arm has supernatural abilities, mostly in regards to accidentally killing people. After escaping the hospital, he comes in contact with the American Zombie Squad, who travel to Norway to help him to stop the Nazi zombies, who are ravaging the local countryside.

Tropes in this sequel: