Literature / The Zombies of Lake Woebegotten 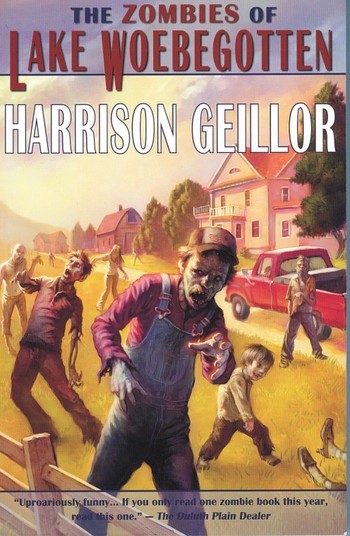 A Black Comedy/horror novel by "Harrison Geillor" that tells the tale of a small Minnesota town forced to face down an invasion of zombies.

When the Zombie Apocalypse hits, college boy Rufus returns to his hometown of Lake Woebegotten to warn his friends and neighbors. However, when he arrives, the situation is more complicated than he had foreseen. The town P. D. has hired Mr. Levitt, a retired school superintendent/serial killer, as their chief zombie hunter, and he's out for blood. The only force that stands in his way is a small group of vigilantes lead by Father Edsel, a Catholic priest, and Daniel Inkfist, a Lutheran pastor. Throw a couple of retired military personnel and an undead bear into the mix, and things are going to get pretty hairy.