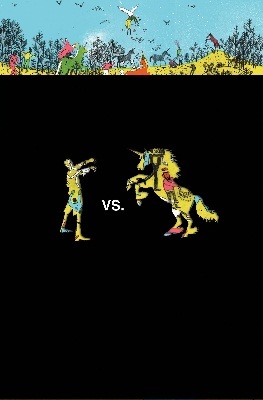 Are you Team Zombie or Team Unicorn?
"Since the dawn of time one question has dominated all others: Zombies or Unicorns?"
Advertisement:

A 2010 Young Adult Fantasy anthology. The short stories were written specifically for the book by many well known Fantasy and Science Fiction writers, and the book was edited by Holly Black and Justine Larbalestier. The 12 authors and their respective stories are divided into two teams: Team Unicorn and Team Zombie.

On Team Unicorn, led and edited by Holly Black, we find:

On Team Zombie, led and edited by Justine Larbalestier: