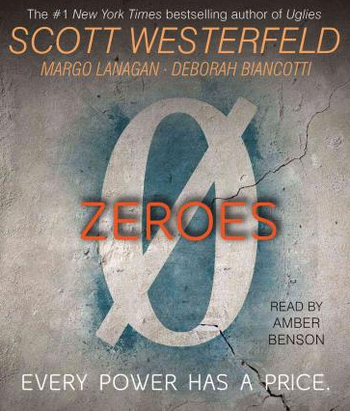 Zeroes is a series of superhero teen fiction novels written as a collaboration between Scott Westerfeld, Margo Lanagan, and Deborah Biancotti.

The Zeroes are a group of teens with superpowers. Ethan "Scam" Cooper has a "Voice" that can say precisely what is necessary to get what he most desires. Riley "Flicker" Phillips is a Blind Seer who can only see through other people's eyes. Chizara "Crash" Okeke is a Walking Techbane who can break any complicated technology in her vicinity — even when she's trying not to. Nate "Bellwether" Saldana can Emotion Control groups, manipulating their emotions so that they feel great respect for him and long to please him. And Thibault "Anonymous" Durant is a Forgettable Character who slips from a person's memory as soon as he's out of their sight.

When the Zeroes first met one another, they planned on forming a superhero team. However, as they began training, it became clear that their powers and personalities weren't suited to it. Finally, a bitter argument tore the group apart, Breaking the Fellowship and causing each of the members to go their separate ways. It seemed the Zeroes were done for good.

The series kicks off a year later, when Ethan gets caught in the middle of a bank robbery gone bad, and has no choice but to call his former friends for help. It's an uneasy reunion for the team, who find themselves being investigated by the police, pursued by criminals, and on a collision course with another, previously unknown Zero, who Nate wishes to recruit.

The trilogy consists of Zeroes, Swarm, and Nexus.