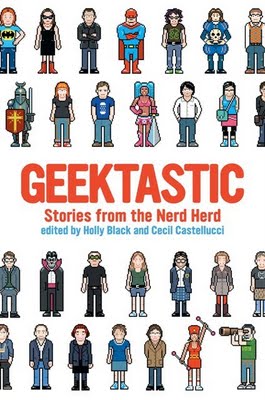 Geektastic: Stories from the Nerd Herd is an anthology edited by Holly Black and Cecil Castellucci, full of nerdy stories. According to the introduction, the anthology was conceived when Black and Castellucci thought of an idea for a story about a Klingon cosplayer and a Jedi cosplayer sleeping with each other. They wanted to publish it, but they realized no place was nerdy enough to accept it.

So they decided to create one.

This was the result: fifteen stories, including the one that Black and Castellucci conceived, about nerdiness in general. All kinds of geeks are featured here - sci-fi geeks, theater geeks, astronomy geeks, archaeology geeks, baton geeks, fantasy geeks, MMORPG geeks, comic book geeks, quiz bowl geeks, and just geeks in general. In between the stories were cartoons drawn by Hope Larson and Bryan Lee O'Malley, further exploring the geekiness of the anthology.

Each story uses an a specific aspect of geek culture to address a broader aspect of life, as follows:

Tropes used by the different stories in this anthology include: