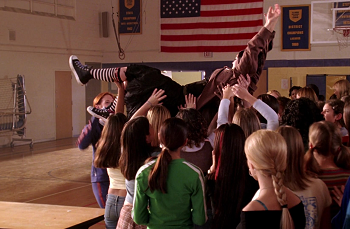 "The crowd is doing the wave, and Phineas is surfing it!"
— Announcer, Phineas and Ferb
Advertisement:

It's the big concert that everyone's been waiting for! The music swells and the crowd rises with it, and suddenly you're up off your feet, being passed along like so many beach balls. You've done it. You've achieved the number one goal of any concert goer: the crowd surf.

The trope has subversions built into it as well: