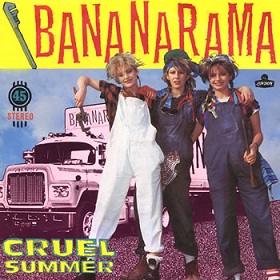 Bananarama are an all-female British pop vocal group from The '80s. They were among the progenitors of the modern Girl Group concept on both sides of the pond and led the way for groups like the Spice Girls, the Pussycat Dolls and Sugababes. Their best known hits include "Cruel Summer," forever associated with The Karate Kid, and their Cover Version of the Shocking Blue's "Venus." The group started as a trio of friends Siobhan Fahey, Keren Woodward and Sarah Dallin. Siobhan left in 1988 to form Shakespear's Sister with Marcella Detroit, and was replaced by Jacquie O'Sullivan until 1991. Many of their biggest hits were produced by Stock Aitken Waterman.

Tropes associated with their works: