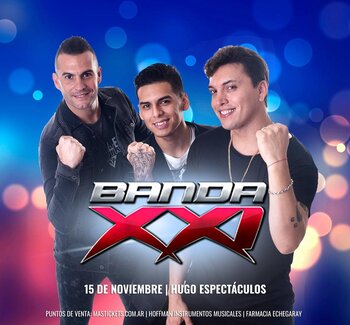 Banda XXI is a music group of cuarteto from Córdoba, Argentina.
Advertisement:

It was started in 1998 by Miguel Alejandro, and their first CD was presented in a show during the anniversaries of Rio Cuarto. It soon became a gold record. The second CD, from 2000, became a gold and platinum record. The singer Marcos Gomez left the band in 2001 and returned in 2003. Yuthiel Pérez Mondeja, singer in those two years, would return to the band later.