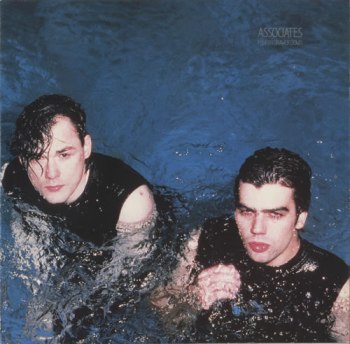 Billy Mackenzie and Alan Rankine take a swim, as seen on the cover of Fourth Drawer Down.
Advertisement:

The Associates were a PostPunk band formed in Dundee, Scotland, by singer Billy Mackenzie and guitarist/arranger Alan Rankine. Their songs marked part of the shift from Post-Punk towards its "phase two", New Pop (which comprised names like ABC and Frankie Goes to Hollywood.

Their debut single was a cover of David Bowie's "Boys Keep Swinging". It attracted a good deal of attention, allegedly including Bowie himself. Two years later, and, after recording their debut album (which had backing vocals by Robert Smith of The Cure), released seven singles, in a quick succession, which was remarkable for that time.

Their entry into the top charts came, however, with the album Sulk, a luxurious album which spawned singles like "Club Country" and "Party Fears Two". Billy Mackenzie's often campy (but dignified) vocals, impressive vocal range, and Rankine's amazing production and guitar playing skills were what always set The Associates apart from the majority of the Post-Punk bands. Martha from Martha & The Muffins also contributed to the album with keyboards and backing vocals, while bass was played by Michael Dempsey of The Cure.

However, Billy's erratic behaviour (which included cruising for hours and missing his passport so he didn't have to perform at certain talk-shows, especially outside the UK), along with drug use and reluctance on his part to tour America led to Rankine leaving the group.

They recorded two more albums (one was unreleased by the label, who thought it wasn't commercial enough), but, while the group still had some good songs, they didn't had the same impact and the band ended in 1990, after the release of Wild And Lonely. Two years after, Billy's debut solo album, Outernational, got released. Billy and Rankine briefly got together in 1993 to make new material, but constant speculation of a reunion tour caused Billy to get reluctant again and they split for the final time.

In the final years of the group, Billy also collaborated with Yello and Shirley Bassey.

In 1997, Mackenzie committed Suicide at the age of 39, a result of his mother's recent death and his struggle with clinical Depression. Rankine became a lecturer in music and also collaborated with Belle and Sebastian on Tigermilk.