The Burlesque of Venus 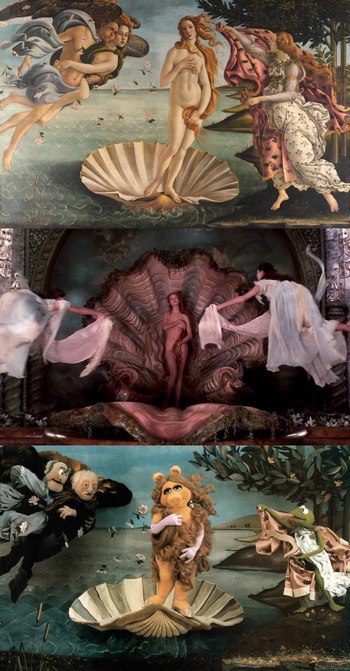 Hey! Put some clothes on!note From top to bottom: The original piece, The Adventures of Baron Munchausen, and The Muppets.
"Aphrodite is beloved in pop culture more as a symbol or as an idea more than a character that does things. Two of the most famous pieces of art in European history are of the goddess Venus: Venus de Milo, thought to be the work of Alexandros of Antioch, and Botticelli's The Birth Of Venus which gets homaged in everything from Lady Gaga videos to The Muppets to Andy Warhol..."
— Lindsay Ellis, "Loose Canon: Aphrodite

Sandro Botticelli's 1486 Tempera painting The Birth of Venus has become a Florentine Renaissance icon that has withstood the test of time and is arguably his most famous piece.

While not The Mona Lisa, the Roman Goddess of Love can be considered a top-tier contender for the title of "Mona Lisa of Florence", Venus on her shell is nearly as iconic as Mona and her smile (Small Reference Pools at work again). Because of this, imitations abound, and not just in the fine art world. People in Film, Comic Books, anime, manga, Video Games and Western Animation like to take the imagery of The Birth of Venus and create a parody - or rather "a burlesque" - of the famous painting. Characteristics include:

The reasons for this vary, ranging from being actual depictions of Venus (or her Greek counterpart Aphrodite), to illustrate the inherent beauty of a specific character, or maybe the creators wanted the viewer to think they were smart and cultured and picked something everyone would recognize.