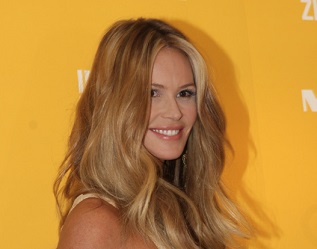 Elle MacPherson (born Eleanor Nancy Gow; 29 March 1964) is an Australian supermodel, actress, producer, presenter and entrepreneur who first became famous through her appearances in the Sports Illustrated Swimsuit Issues during the 1980s and 1990s, debuting in 1985 and appearing on the cover a record five times, including three times in a row from 1986 to 1988. She appeared in MANY fashion magazines during her active modeling career, including appearing in every issue of, naturally, ELLE for six straight years. Following a brief appearance in Woody Allen's 1990 film Alice, she made her first significant acting appearance in 1994's Sirens, where she drew notice, for different reasons, both for appearing nude and for giving what some critics, including Leonard Maltin, deemed a good performance. She, Naomi Campbell and Claudia Schiffer tried their hand at a celebrity restaurant called the Fashion Café, which did not last very long. She has had more success with her lingerie company Elle MacPherson Intimates, as well as other business ventures.