Film / Overdrawn at the Memory Bank 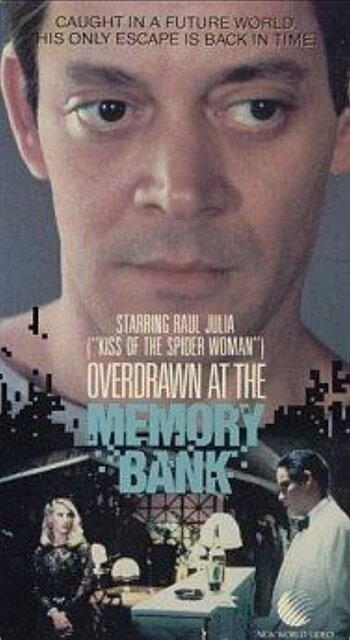 In a World… where oppressive MegaCorps rake in billions of ill-earned dollars while treating their workers like slaves... a Toronto production company decided to adapt one of John Varley's Eight Worlds short stories into a Made-for-TV Movie.

Finding financing from New York PBS station WNET and somehow acquiring Raúl Juliá as the lead along with Linda Griffiths, one of Canada's top stage actresses, they unleashed a production called Overdrawn at the Memory Bank. A low-budgeted affair, shot on video and making heavy use of chromakey (early green screen) special effects, it was the third (and last, due to not being able to get funding for any more) in a series of films by PBS that were adapted from literary works of science fiction. The first two were 1972's Between Time and Timbuktu

, an adaptation of several Kurt Vonnegut stories, and 1980's The Lathe of Heaven, based on the Ursula K. Le Guin novel of the same title.note The running theme between all three productions was an ordinary man put in extraordinary circumstances.

In a future that is only marginally more dystopian than the present, Aram Fingal is a bored programmer working for Novicorp, and earns his superiors' ire by "scrolling up cinemas" at work, particularly Casablanca. The solution, of course, is "prophylactic rehab," a two-week (or two days, depending on the scene) vacation in which his consciousness is "doppelled" into a wild animal at a nature preserve. Under the supervision of Computech Apollonia James, Fingal experiences life as a decrepit old baboon until the animals on the preserve get trashed on ripe fruit and place his temporary body in danger, prompting him to activate an escape clause.

Unfortunately, a little hellraising kid screwed around with the label on Fingal's body, so the technicians supervising his little adventure have no idea where it is. Once this news leaks out via an industrial spy, the all-powerful Novicorp chairman orders that Fingal's mind be stored in the HX368 supercomputer, which runs everything from finances to the weather. Meanwhile, the technicians race to hunt down Fingal's body, since he only has a few hours real time before his mind starts to break down without it.

At first Fingal creates a simulation of a typical work day, but he quickly grows bored and starts boinking a simulacrum of a hot co-worker. Once cybersex loses its charm (and greatly annoys Apollonia, who finds herself falling in love with him), Fingal builds his own version of Casablanca, complete with a Rick character that is his own digital double. Apollonia warns him not to cause too much trouble, but our Fingal is a little rebel, and starts messing around with Novicorp finances while inside the HX368, also causing catastrophic weather disasters around the globe in a fit of whimsy. Soon the Chairman is dispatching his own electronic agents to kill Fingal, while Apollonia sides with the renegade programmer as she tracks down his body.

At a final showdown at Rick's bar, Fingal "interfaces" with the mainframe, orders the Chairman into a month of compulsory rehab, redistributes Novicorp shares to the downtrodden employees, and makes new Casablanca-themed identities for himself and Apollonia as he vows to fight the system. It's like if someone combined Fight Club, 1984 and The Matrix...

For the Mystery Science Theater 3000 version of the film, please go to the episode recap page.