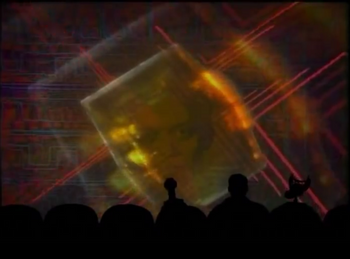 This lovely Raul Julia pendant, available only on the Home Shopping Network.
Advertisement:

The Brains were a bit leery about riffing this film, due to Raúl Juliá's tragic death three years earlier being very much on their minds. Nevertheless, they did the episode anyway due to the film's low budget and incoherent Technobabble while managing to avoid any personal attacks on Juliá.