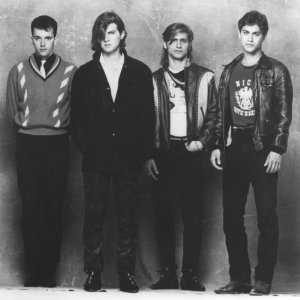 "The band that wrote 'Safety Dance' has the most unthinkably offensive name we've ever heard."
— The TF2 Team, the world's foremost lover of hats.
Advertisement:

Men Without Hats are a pop group from Montreal, Quebec that achieved their greatest popularity in the early to mid 1980s. They were characterized by the deep, expressive vocals of their lead singer Ivan and their elaborate use of synthesizers and electronic processing. Their most successful single, "The Safety Dance", was a Top 10 hit in both the US and the UK. Despite often being considered a One-Hit Wonder in the United States, they had another Top 40 hit there a few years after "The Safety Dance" called "Pop Goes the World" (which was popular enough to grace the Top 20 as well).

At the core, Men Without Hats consisted of Ivan Doroschuk and his brother Stefan; others who were at least briefly in the group include a third brother, Colin, as well as Jeremie Arrobas, Tracy Howe, Roman Martyn, Mike Gabriel, Jean-Marc Pisapia, Lenny Pinkas, and Allan McCarthy. They emerged with an EP called Folk of the 80's (1980). Tracy Howe was only with the band briefly, but long enough to be credited on a reprint of Folk of the 80s, despite not appearing on it; he later achieved some success with his new band, Rational Youth. Pisapia went on to form The Box, and later, Arrobas and Gabriel left to work with him for a while, eventually founding their own group, Isinglass.

A popular but unconfirmed tale is that the name originated from a misread announcement to one of their early gigs as "Men Without Pants" by a francophone MC in Montreal. Though that tale may be unconfirmed, the fact is that Men Without Hats first started off in bars as Men With Hats, but they decided to change the name to Men Without Hats as they always threw their hats off at the end of a performance.

Notable Men Without Hats videos include:

We can trope if we want to, we can leave your friends behind...

"He can dance if he wants to"

Turk sees an opportunity to quote something and runs with it.

"He can dance if he wants to"

Turk sees an opportunity to quote something and runs with it.