Music / Mental As Anything 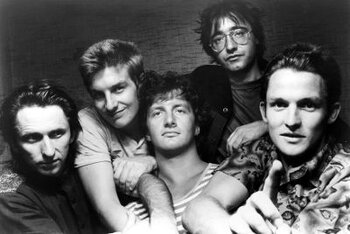 Mental As Anything [l-r]: Reg Mombassa, Greedy Smith, Martin Plaza, Wayne DeLisle, Peter O'Doherty.
"Hey yeah you with the sad face
Come up to my place and live it up"
— Mental As Anything, "Live It Up"
Advertisement:

Mental As Anything are an Australian new wave pop/pub rock band that formed in 1976 and continued playing to the late 2010s. Beloved by local fans for their fun, quirky, infectious style, clever lyrics, and humourous video clips, they achieved twenty Top 40 singles on the Australian charts. Their biggest hit, "Live It Up", also reached #3 on the UK charts and #6 in Germany. Other big local hits include "The Nips Are Getting Bigger", "If You Leave Me, Can I Come Too?", "Too Many Times" and "Rock and Roll Music".

Their core line-up stayed the same from 1977 until 2000, when brothers Peter O'Dohertynote not to be confused with Pete Doherty and Reg Mombassa left the group. Several changes followed over the next two decades, with the band still touring and performing regularly.

The last founding member remaining in the band, Greedy Smith, died of a heart attack on December 2nd 2019. He was 63. The group has not been active since.

Not to be confused with the Farscape episode of the same name.

"Whoa-oah, the tropes are getting bigger":

"And I'm just about to get lost too."