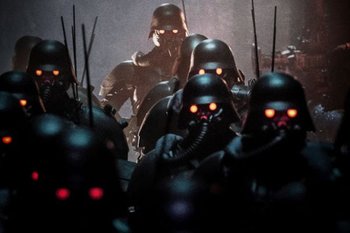 The last thing you'll see before you're taken out.
Advertisement:

Illang: The Wolf Brigade (sometimes known as Inrang: The Wolf Brigade, which has been used at least once) is a 2018 Korean science fiction dystopian movie directed by Kim Jee-woon. It stars Gang Dong-won, Han Hyo-joo, Jung Woo-sung and Kim Mu-yeol. While the movie has wholly adopted Jin-Roh: The Wolf Brigade, it does have parts of the Kerberos Saga included in does as part of giving it some mythology gag.

The movie has been streaming overseas via Netflix. Illang has been entered in the San Sebastián International Film Festival for the Golden Shell award.

Illang had a movie budget of US$17 million with Korean box office revenue hitting at US$6.2 million, which is considered a Box Office Bomb. In recent months, it has a Cult Classic following, in part because of its indirect ties to the Kerberos Saga.

To promote the movie, Yoon Tae-ho was tasked to pen a prequel webcomic prior to the movie's opening on July 25, 2018.

Illang is set in the year 2029 when the two Koreas decided to agree on a reunification treaty that calls for the establishment of a provisional government that will allow for the easing of transition for both countries to reunite peacefully. However, China, Japan, Russia and the US have enacted sanctions against this move for fears that it'll become a strong economic powerhouse in the Asia-Pacific region.

Meanwhile, right-wing opposition against a reunification move with the North has given rise to opposition groups, including the Sect. The Korean National Police Agency establishes a paramilitary special forces unit known as the Special Unit in order to hunt down the Sect and other anti-government groups operating in South Korea. Over time, the unit is feared by the public for taking out a group of female school children while investigating a school for supposedly being an anti-government hideout. They began to use the iconic red eye masks to hide their fears and hesitations from the public.

During a raid on a Sect hideout in the sewers, SU officer Lim Joong-kyung witnesses a young girl commit suicide with a satchel of explosives hidden in her bag. He is placed on limited duties due to supposedly ignoring orders to kill or apprehend her. While on leave, Lim gets involved with the girl's older sister, Lee Yoon-hee.

Lim realizes that his involvement with Lee may be part of a move within the South Korean government to publicly justify their reasons to disband the SU, thanks in part to the Ministry of Public Security.

You can see the English translated trailer here