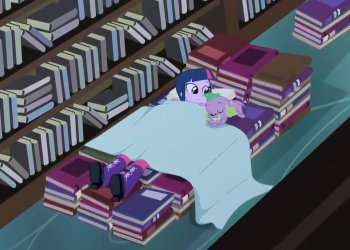 I've heard of reading before bed but this is ridiculous.
Gumball: Oh, why is there always a law against everything I wanna do?
Anais: Because the last thing you wanted to do was move into the supermarket so you could eat for free.
Gumball: Uh, if the food enters your body and exits it while it's still in the supermarket, it's technically not stealing.
— The Amazing World of Gumball, "The Box"
Advertisement:

Living in a Cool House is awesome. It keeps you out of the weather, keeps you safe from crime, and gives you a place to store your stuff. The problem is, decent houses and apartments are expensive. Sure, you could go cheap, but wouldn't it be nice to live somewhere with all the amenities of a good home, free of charge? Well, if a character isn't too concerned with legality, they can! Airports, malls, hospitals, and more can all provide perfectly sufficient housing. This trope comes in three flavors:

This trope can also apply to living in something that's not a building at all, like a boxcar, doghouse, or dumpster. These usually provide little more than (poor) shelter from the elements, and a character who lives in these is either out of options or has no standards whatsoever. Alternatively, it may be Played for Laughs, such as having all the amenites of an actual home (possibly by being Bigger on the Inside), or having characters treat it as an ordinary house, except perhaps the Only Sane Man.

This trope is Truth in Television, with some people living for years in these places. Compare "Stuck at the Airport" Plot, Houseboat Hero, House Squatting, and Lives in a Van for other tropes about people living in unusual places. This sometimes overlaps with Bad Bedroom, Bad Life. See also Not-So-Abandoned Building. Despite the name, Living in a Furniture Store is not a subtrope.