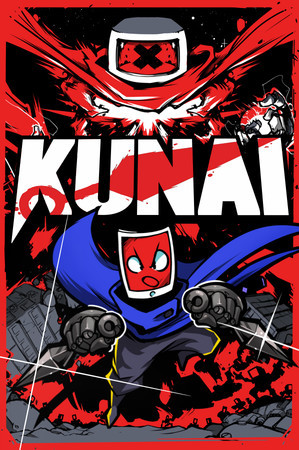 "You are a NINJA TABLET. ‘Nuff said."

It's the future, and humans are all but completely wiped out. These days, society is mostly made up of robots instead, and a civil war's broken out between the megalomaniacal AI, Lemonkus, and the resistance fighters hoping to keep it from taking over what's left. It's a losing battle for the freedom fighters, and all seems lost until one tablet-faced robot named TBY-1143 comes to life in a mysterious lab...

Nicknamed Tabby, the robot's a quirky little fella with a wicked fighting spirit, tearing through Lemonkus's forces with insane speed and style. As Tabby expands their arsenal and explores the mechanical world around them, it'll all fall on one robot to bring the fight to Lemonkus and save everyone left from extinction.

KUNAI is a Metroidvania game by Dutch indie studio TurtleBlaze, released in early 2020 for PC and Nintendo Switch by The Arcade Crew. Much of the gameplay focuses on Tabby's weapons and movement, with a fast-paced vibe, a pixel art style making the most of a limited color palette, and most importantly, a robot ninja with grappling hooks.