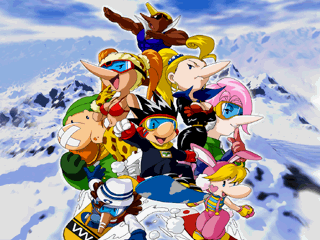 Look at the size of those things! (By which we mean the noses, of course.)
Advertisement:

Snowboard Kids is an action racing series produced by Atlus and Racjin debuting in 1997 on the Nintendo 64. While it didn't make much of a splash compared to similar first-party titles, the cute atmosphere and unique character designs were part of what helped it gain enough recognition to spawn two sequels - Snowboard Kids 2 and Snowboard Kids Plus (the latter released only in Japan for the PlayStation).

Years of inactivity passed until 2005, when SBK: Snowboard Kids was announced out of the blue for the Nintendo DS. Unfortunately, this attempt at re-imagining the series to appeal to teenagers did poorly with both critics and the fanbase. Despite this, Atlus claims they haven't given up on the series yet, but only time will tell...