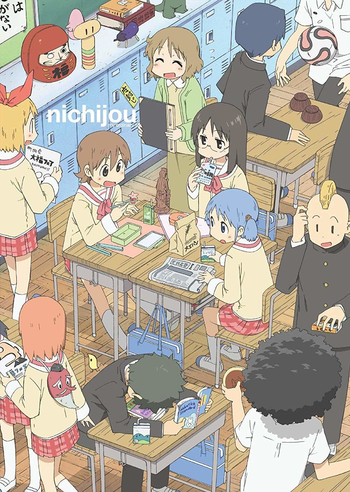 The Wacky Homeroom occurs when there are students, all in one class, that have distinctly quirky personalities, such as Alpha Bitch, Brainless Beauty, etc. The students may make up the Five-Man Band archetype, or perhaps many of them will be Cloudcuckoolanders with an Only Sane Man thrown in to represent the audience and/or contrast all the wackiness.
Advertisement:

If there's some focus on the teacher, expect to see Sensei-chan, the Absentminded Professor, and/or the Misplaced Kindergarten Teacher heading up the group. Either way, hijinks usually ensue.

Rule of Funny and/or Rule of Cool often applies. Often present in an Extranormal Institute, such as a Superhero School.

For a similar trope outside a school setting, see Ragtag Bunch of Misfits.