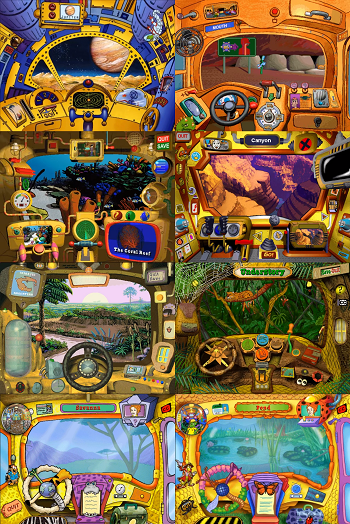 The interior of the bus tends to theme with the day's topic
When The Magic School Bus was adapted into an animated TV series, the publishers of the books, Scholastic Press, collaborated with Microsoft and a software company called Music Pen to adapt the books as a series of point-and-click edutainment games starting in September of 1994. The first game was an adaptation of The Magic School Bus Gets Lost In The Solar System and was released within two weeks of the first episode of the show, which adapted the same book to television. Seven more games followed, ending with The Magic School Bus Explores Bugs in 2000.
Advertisement:

The games featured all of the characters from the show and covered topics visited by the show somewhat more broadly. The same basic format held throughout the series. Every game had an overall objective, usually some kind of Fetch Quest, but this was secondary to the Wide-Open Sandbox you were afforded. The bus served as your Hub Level. Controlling it, you could travel to various locations associated with the game's topic, each location having at least one Mini-Game. There were also reports, supposedly written by the kids in Ms. Frizzle's class, and a number of virtual science experiments.

There was also a series of five "activity centers" covering a somewhat different range of topics that were released from 2000 to 2001 and did not have any objective, instead focusing on information and mini-games. In an inversion of the Video Game 3D Leap, these were fully animated while the main series used a mix of animated gameplay and CGI cutscenes.