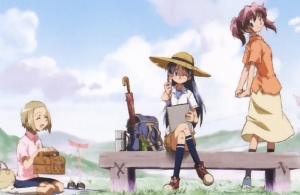 Kajiwara Sora and her friends in the art club sketch what they see and make observations on life. That's really all there is to it. Sketchbook features beautiful scenery, plenty of feel-good moments, and cats. Can't forget the cats. It's just the kind of series that puts a smile on your face.

Sketchbook is a Slice of Life manga written by Totan Kobako, which originally ran in the Shonen anthology Monthy Comic Blade from 2003 to 2014, and resumed serialization in Monthly Comic Garden 2014 onwards. A Thirteen Episode Anime by Hal Film Maker, titled Sketchbook ~full color'S~, aired in the Fall 2007 anime season.

After 17 years of serialization, Sketchbook ended its 208 chapter run in 2019.