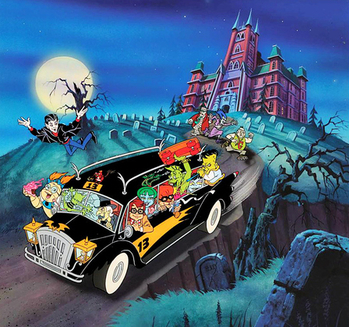 Well it's just like any other high school
You've got the same problems in your head
except their lockers are coffins
And the teachers...
Are the undead
— Theme song
Advertisement:

This short-lived Hanna-Barbera cartoon premiered in 1990 on NBC, with the full title of Rick Moranis in Gravedale High, featuring teacher Max Schneider (as the title suggests, played by Rick Moranis) as the sole human teacher in an All-Ghouls School, teaching a class of misfit students who, according to the headmistress, otherwise would have been booted out from the school (despite none of them showing any outrageously bad or different behavior, aside from maybe being lazy and distracted).

Many of the 13 episodes featured some sort of problem caused by immature or stupid actions of a student and were usually solved by teamwork or some other Aesop-heavy answer.